Dive and Slide into the Blue LP 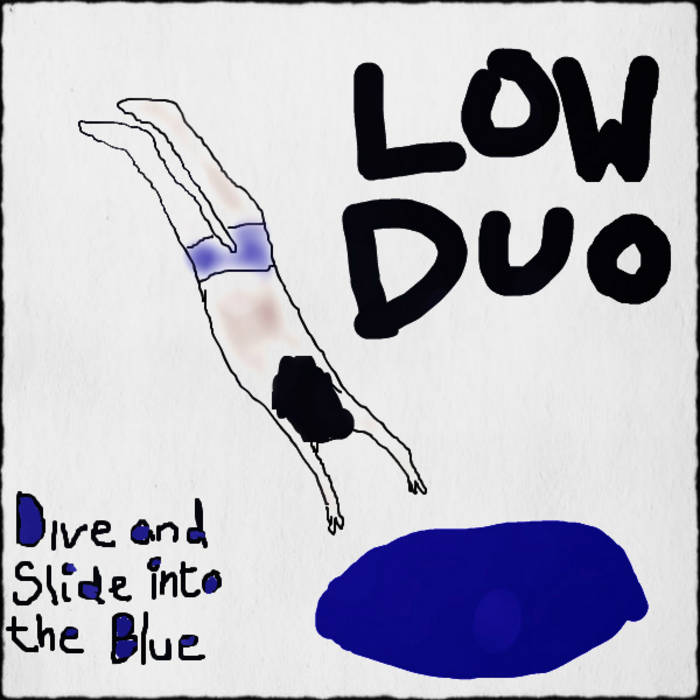 Written and performed by Adam and Leigh Greenwood
Recorded at Alchemy Studios, London, by Kenny Jones

"They really are doing something different... and what they've produced is outstanding."
(Emily Brinnand, The Guardian 'New Band Up North')

"Unofficially: I’ve been a huge fan of Leigh and Adam’s work ever since clapping ears on their supremely melancholy It Was You and Me in January 2011. They’ve been session guests on 6 Music Introducing and if the lean, atmospheric and understated stylings of this new song appeal to you half as much as they do to me, don’t hesitate: nip along to www.lowduo.co.uk and buy the album. Now."
(Tom Robinson, BBC6Music)

"We’ve long been a fan of Adam and Leigh Greenwood’s prickly, agonising understatement and dramatic folk minimalism, and you should be too!"
(Robert Cooke, Drowned in Sound)

"It does indeed sound like a few demons were exorcised in the making of this album, and maybe it has been enough to fix both heart and thumb...it's unlikely that Low Duo are planning a follow-up just yet, but should they ever suffer from writer's block, we know a bloke with a crowbar who we can send round."
(Kev, The Sound of Confusion)

"If you’ve not encountered Low Duo yet, this is the perfect distillation of their magic – pervasive dread cloaked in some of the most complete songwriting Sheffield has seen in a long time."
(Jonathan Scott, Exposed Magazine)

"Both Greenwood brothers reveal the full extent of their talent time eight songs by turns disarming, touching and poignant.. Low Duo strength lies in its ability to change the atmosphere does not fall into a certain inherent monotony often in the form of the duo. The acoustic piano and make their appearance and the charm works again. Superb!!!"
(Gwen, Kfuel Radio, France)

"There are few words to capture the emotion but the tone in Leigh’s voice manages to draw you into the sense of loss alongside Adams racing guitar riffs... it’s what Low Duo do best. ... The Greenwood brothers have the ability to bring out the most of every single sound recorded without the need for high spec production, its back to basics and it certainly works with their own style."
(Jenny McCambridge, Counterfeit Magazine)

"Low Duo is one of the bands I feel in love with when we started up SYFFAL. Their music is awesome."
(Tim, SYFFAL)

"The darkness within this music is beautifully crafted to give a subtle yet awe-inspiring effect."
(Abigail Suter, Alternative Music Press)

"Mournful arpeggios that become desperate strums and a voice that needs to scream, but simply soothes away the pain by low whimpers and loud harmonising."
(Sam, Sloucher)

"The two brothers from Sheffield have a natural synchronisation....standing in a dimly lit room listening to sad songs might not sound like a typical Saturday night, but by the end the crowd appeared to be strangely uplifted."
(Paul Robson, Now Then)

"Teasingly, there is a big sound right on the edge of these tunes. The arrangements and lyrics sum up a confident emerging talent. This album will not disappoint; a collection of mature songs and a sound that deserves to be broadcast more widely."
(Simon Bell, Now Then)

"The band sound wild, with all the earnestness, calm and savagery that that would imply. It’s what Bon Iver’s debut album might have sounded like had he not been obsessed with girls and instead run naked through the woods every day."
(Sachin, Anywhere in Albion)

"They make ambitious indie-rock considering the only instruments used are one guitar, and on first listen, the album previews for Dive and Slide into the blue, are very good."
(Jim, Backseat Mafia)

"Low Duo is an interesting prospect. The pair is solely comprised of brothers Adam and Leigh Greenwood, who bring a minimalistic, lo-fi sound of simply a guitar and vocals....alternative pop melodies with some dark undertones...Low Duo fit the bill perfectly".
(Dougal Mackenzie, Hooting and Howling Magazine)

"Low Duo thoroughly impressed me...with their melancholy, intriguing brand of pop. As they performed ‘Born into a spider’, never before has the plight of an arachnid hit such a chord within me."
(Nathan Page, Sheffield Pulse)

"It pays off well when the band capture a Sparklehorse-esque folk vibe and at its best the album sounds like a lost radio broadcast coming from a deep forest"
(Sachin, BearFood)