The EP of Fear and Failure 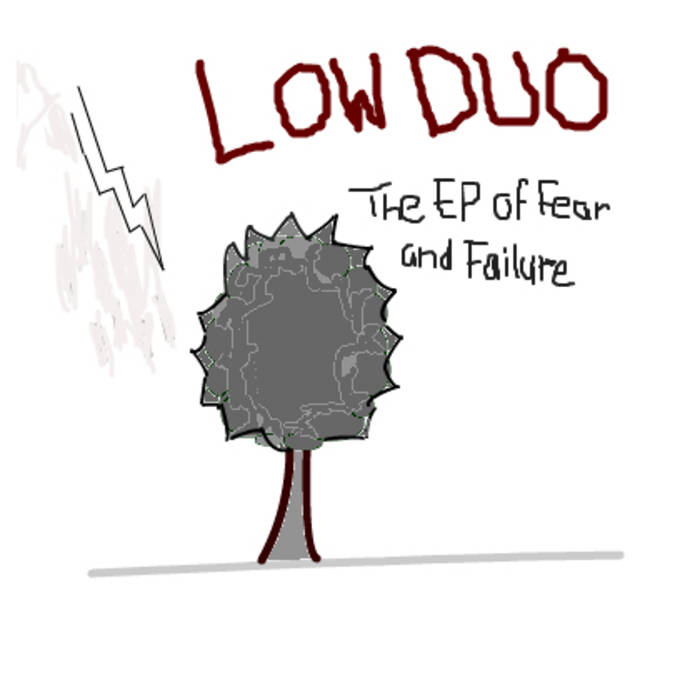 The EP of Fear and Failure is darker and more ambitious than the first recording. After plaudits including The Guardian 'new band of the day', PRS for Music 'new band of the week', front page feature on Myspace.com, airplay on BBC 6Music and XFM, 4/5 live reviews from The Fly, Low Duo are back with their second EP.

Sold-out gigs with Anna Calvi, Courtney Pine and Edwyn Collins, have followed with resultant airplay from BBC's Steve Lamacq and a 3 song live session/interview for Tom Robinson. The new EP has ensured we pick up where we left off. Press and reviews continue to come in thick and fast:

"Are Low Duo Sheffield's best new band? The lyrcis hurtle into a head long collision with Adam's guitar, as the younger siblings wrist frantically rattles out waves of chords, building a one-man wall of sound. It's as though he is playing Bob Dylan's Masters of War at ten times the speed, with all that bleak, brutal bitterness delivered with arresting honesty. The city's musical bar has been raised another notch"
Rob Cooke, Exposed Magazine

9/10 "Haunting, anguished and just a little bit sinister, Low Duo have the paradox of minimalist massiveness all sown up"
Whisperin and Hollerin

"This is minimalism. Meet the Greenwood brothers from Sheffield (UK). Leigh is the tortured vocalist. Adam is the capable axe man. Their new recording, The EP of Fear and Failure, is evocative. It’s as if a geneticist spliced Thom Yorke and Nick Drake. It clocks in at 14 mins 23 secs. It goes by fast. You will hit repeat. It is captivating."
The Dadada

"The city of Sheffield is playing a new sound, an alluringly dark and exciting sound. Formed of Leigh and Adam Greenwood, these siblings’ melancholic undertones link both the bands emotion and arrangement. The uncomplicated setup of one instrument and one vocal, demonstrates perfectly, music in its most pure form"
Northern Noise

It's intense. Yes, intense folk music. It feels like the guitar is on a meth binge, beating the shit out of the chords, not necessarily breaking the mold on difficulty. But I fucking dare you to match this dude's intensity on the guitar. Low Duo sound like the way it feels when you know there's someone else out there either feeling the same or capturing the way you feel that you haven't been able to scream or beat the shit out of the guitar that particular way.
Joel, SYFFAL

Adam Greenwood's guitar playing is absolutely captivating and provides the perfect bedding for Leigh Greenwood's slightly unhinged and anguished voice. Oh that's right they are also brothers and the combination of the two powers Fear and Failure's brilliance. I cannot wait to hear more from these jagoffs.
Tim, SYFFAL

"The Sheffield act, and their new EP, are actually brilliant – evocative, minimalist, thrilling and entirely different enough"
Some Of It Was True! Blog

"Ooh, sparsely picked chords provide a spine of wood for the dark folk tinged lyrics that put you in mind of Peter Moren with a hangover or an ominous Nick Drake"
Gill Mills, New Music Daily

"Let me introduce you to Low Duo, a couple of brothers who use one guitar and one person singing to make some of the most haunting, minimal and enchanting music I’ve heard in quite a while."
Safety, Fun and Learning

"The Greenwoods sort of look at silence as a precious canvas and only cover it partly with sound. For any folk fans that also dabble in Brit-pop, this is your very, very lucky day."
Citizen Dick (Blog)

"Minimalist but by no means simple, the duo are still able to be dynamic composing songs, lyrically clever and emotive – showcasing a basic set up to the fullest extent. Beautifully melancholic"
Toast Magazine

"This EP proves that this band has a lot more to offer as they explore the realms of their self created, sharp emotional soul acoustic niche genre - that as of yet doesn’t really have a title!"
Counterfeit Magazine

"They make a sort of melancholic music vaguely reminiscent of The xx and Radiohead. There are sudden crescendoes and diminuendos, both of which add to the intense dramatic feel of the otherwise nicely minimalist music. Definitely worth listening to if you haven't already!"
The Music Journal

"I just bought this brand new and lovely five-song EP by a couple of brothers for two pounds, which is who-knows-how-much other than exactly half a pound more than the asking price. Very generous, I know"
The Hairpin Blog

Thank you for your kind monies! You are helping us to be able to record more music!