The EP of Hope and Despair 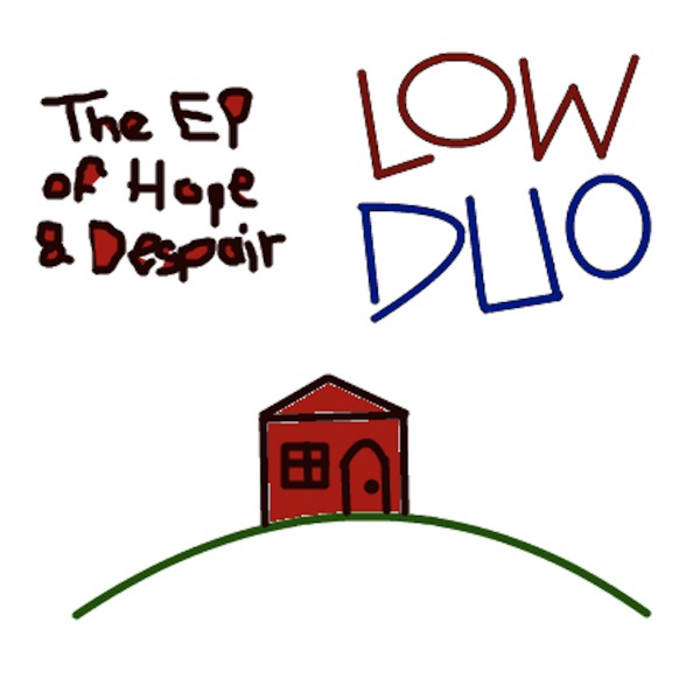 The EP of Hope and Despair is the debut recording by Sheffield brothers Low Duo.

Recorded in one day at G2 Studios, every song features only one voice and one musical instrument.

The EP has received wonderful reviews:

"It's pretty intense. Low Duo give fresh lustre to that overworked notion of the darkly powerful."
The Guardian, 'new band of the day' no. 986

5/5 "The most beautiful body of music to come out of Sheffield this generation. No exaggeration.
There are very few talents in the world you can compare to the late Jeff Buckley, but this is certainly one of them. Truly magnificent songwriters."
Will Hitchmough, Counterfeit Magazine

"8/10 - Beautiful and delicate, there's magic in the space between the notes and in Leigh's haunting and cracked yet powerful voice. Truly magnificent."
Whisperin' and Hollerin'

"Low Duo have stripped back superfluities until all that remains is raw emotion and beautiful tunes to convey it. In this and the poetic emotion power, particularly of opener ‘Fifteen Years’ one can liken the listening experience that perhaps felt by early listeners of The Smiths, tumbling with their tortured soul."
It's All Happening

"An amazing voice accompanied by a great musician, what these two have to offer is brilliant."
Adam Hardy, allgigs.co.uk

"The back to basics approach has really worked for these two; absolutely outstanding."
Daz Walsh, Sheffield Music Scene

"The raw brilliance of their music echoes through the emotive lyrics giving their songs a subtle anthemic feel. Definitely a band that will take Sheffield by storm."
Music Without ID

"The lyrics are poetic and heartfelt, and the delivery is totally compelling... a new and important local talent."
Exposed Magazine

"These songs get under your skin and creep up and down your spine, firmly lodging themselves somewhere deep inside you, their simplicity making them incredibly easy to get immersed in. It really is amazing how much Low Duo get out of such simple stripped back arrangements - they leave you on the edge of your seat, genuinely touched, and there's so little going on musically that you wonder how they do it."
Lend Them Your Ears

"Mesmerising and affecting, Low Duo really are one of the most impressive bands to have come out of this generation of the sheffield music scene."
The Sheffield Scenester

"Low Duo, through the simple device of voice and guitar, restore lustre to a way of making pop music in England. This piece is a magnificent tribute to The Smiths, Felt and other Mc Carthy. Perhaps the big buzz of 2011 pop."
K Fuel Radio (France)

"A stunning directorial debut. Words of black poetry are at times overwhelming, with songs recalling the most beautiful tones of a melancholy Morrissey. Formed only in August 2010, the brotherly duo are attracting rave reviews already and have recently been put forward by Paul Lester of The Guardian."
toujoursuncoupdavance.com (France)

"Songs about distressing dreams and bloody summers, as if Nick Drake and The Smiths in their most depressed moments, were compressed into two. All this from rough home videos filmed in front of peeled wallpaper. Despite their short career Low Duo have already opened the tour of Anna Calvi, the English sensation of the moment. Right after journalists began to talk of how Leigh Greenwood's voice soars over the fluid guitar of his brother Adam, recalling immediately Jeff Buckley. Quite notable considering this is just one guitar and one voice."
Laboratorio Pop (Portugal)

"So much longing that at times you forget it's just two brothers, one armed with a guitar, the other with his great pipes, doing one great racket."
Sloucher.org